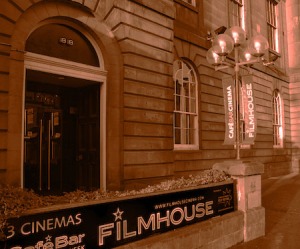 Yesterday I spent a session with SKAMM (Scottish Kids Are Making Movies) at the Edinburgh Filmhouse after being invited along to talk about the process of scriptwriting and how a script changes as it develops into a shooting draft and then is actually shot.

After a read-through of the original script for the Edinburgh-shot short Love Cake that I wrote and part-produced, we watched it then discussed character introduction, followed by a Q&A. And they were all confident enough to present short pieces they’d written, for feedback. It was great to see such an enthusiastic group –  I wish something like this had been around when I was first getting into writing and film! Look forward to seeing all of the exciting films they’re planning.