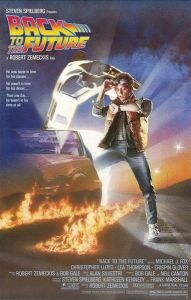 Interesting event 0.5 : Fellow writer, Laura had a birthday party from heaven – she rented a screening room and showed ‘Back to the Future’! Was great fun, and I’d forgotten so many of the images and in-jokes from that film, ahhh nostalgia. Kudos to everyone who dressed up in an 80’s (and 50’s) stylee, and birthday wishes for Laura, may you have many fruitful years of happy writing to come.

Interesting event 1 : The start of the week saw me beginning my Advanced Film Practice course at the Screen Academy with 7 other keen souls, who break down as 2 other writers, 4 producers and 1 director. Lots of work ahead, but though feeling a little daunted, it also feels like a great opportunity is unfolding. Some funding is available for production, later on in the course. I’ve settled (for now) on drafting a warm-hearted short, but have suddenly realised I may want to make a trilogy which could stretch across a couple of genres. Need to work that one out and see if it’s possible. I’m also planning a series of 6 learning objectives, small exercises that will allow me to experiment and explore areas I’m interested in. I’m feeling a bit vague about the whole thing, but expect that’s usual at this early stage… it is isn’t it….. come on, you know you feel it too… don’t you?

Interesting event 2 : Attended a meeting of the “Screenwriters, EH” group in a pub in Edinburgh to hear my mate Ronnie detailing his BBC Sharps experience. Great fun it was too, and met lots of keen, interesting scribes. If you’re a writer or film-maker in the area and interested in the next meeting, let me know and I’ll send you some details : great little pub, nice people and a film-y atmosphere – what’s not to like!

Interesting event 3 : After said meeting and a few drinks, I headed off to stay at a friend’s flat to avoid having to drive home. Needless to stay we ended up gossiping for hours, and then realised we probably hadn’t a hope in hell of getting up in time to avoid the Traffic nazis in the morning, so at 3am-ish we decided to head out and move cars to a non-nazi area a few mins walk away. All fine so far, but as we drove through rainy streets, we reached some roadworks where a phantom loomed out of a side-road and flagged down the car. Tall, pale and crying, it turned out to be a distressed elderly man, with bandaged feet and no shoes. He appeared to be Polish and kept asking for the ‘hospit-ale’. I automatically assumed the worst, and figured he was probably a drunk, but my hardy friend was made of sterner stuff, and since we were a small convoy of 2, invited him into her car and we agreed to take him to the Police Station (don’t try this at home – it’s not usually considered wise to pick-up odd men in your vehicle). Couldn’t find the Police station, or get through to NHS Direct for the nearest A&E details, but then a taxi driver saved us and led our convoy (now 3 cars long) up to the Police at Fettes where we deposited him. We also managed to contravene station policy by parking in the Director’s parking space and that of the Chief Constable – living on the edge! The guy at reception seemed quite thrilled to see us – things did look very quiet. He ordered an ambulance for the old bloke and sent him off to get checked over. Hope he found wherever he was meant to be. We got 4 hours sleep, and never has a bacon butty in the morning tasted so good.

Next month : I’m aiming to rescue a puppy without a collar, and bravely park in a permit-only space. Rock and roll!

One thought on “Interesting events”