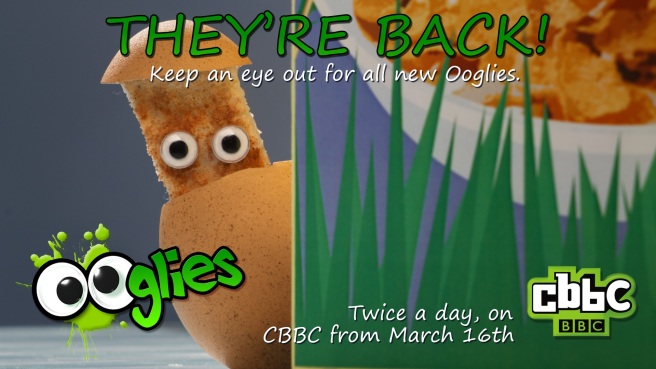 Excited to see a TV series I worked on in the latter half of 2014 is now about to be aired! Series 3 of OOglies, a stop-motion animated children’s series, will start broadcasting this afternoon, Mon 16th March on CBBC, twice a day at 15.15 and 18.20.

I was lucky enough to be on the writing team alongside some amazing creatives, working on OOglies’ short, comedy sketches featuring animated food and household objects, most of which feature the infamous ‘googly’ eyes.

*Fact: previous episodes watched with my niece and nephew inspired a new personal tradition – I still stick OOglie-style wobbly eyes on my Christmas satsumas every year!

It was a fantastic experience to be involved with such a beloved, BAFTA-nominated programme, and I’m looking forward to seeing both old and new characters and their splat-tastic adventures making it to air.

TV listing (and that all-important credit) here, and here’s even more OOglies info including one of their Comic Relief sketches.